This past weekend, we had a neighborhood-wide garage sale. In sifting through things my mother-in-law gave us to sell, I found a book called Stringtown by Zora M. Talbot. Man, have I stumbled on a rarity! 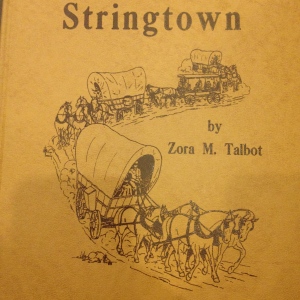 Aside from being out of print on Amazon and out of stock on Half.com, this book is entitled after a town in Texas that no longer exists. From what I’ve gathered, it seems as though the town was absorbed by San Marcos, TX (right outside of San Antonio) somewhere between the 19th and 20th century as a result of a new railroad bringing tremendous growth to the area.

According to one source, “In 1990 the only surviving evidences of old Stringtown were a log cabin once used as a slave quarters, the former home of Gideon Thomas Johnson built in 1879, and the Pitts Cemetery.” (Texas State Historical Association) Can you say, “GHOST TOWN!”

Of course this relates in some way to the American Civil War, don’t you worry. I found a few nuggets in Part II of the book (Disasters, Civil War, Reconstruction) that I’ll have to share in subsequent posts. But for now, I learned that there was more than one coffee substitute used during the war, other than the chicory that I’m familiar with, having grown up in New Orleans.

Food was very scarce – flour, sugar, and coffee almost impossible to buy. Sweet potatoes were parched and, at times, rye and okra beans were used as substitute for coffee. When a real delicacy was wanted the slaves were sent to the mountains in search of a ‘bee tree.’ They would cut the tree down and remove many pounds of rich wild honey from the center of the trunk. This honey was used in cooking and to sweeten the substitute coffee. (Talbot, 50)

Until next time, Drink what ya got…

Gnawing on Life One Bite at a Time

Speaking in a hundred silent ways

This is all going on in mine....whts in yours??

the easiest way to discover your next favorite blog

traditional haiku in the english language

At the table in picture and verse