Soldiers were notorious for keeping good records of what was going on in the American Civil War from day-to-day.  Whether it was in their personal diaries, letters home, log books, or military correspondence, they shared a variety of information.

Weather was a common subject noted, followed by marching orders and miles traveled for the day.  Soldiers would also describe the conditions of roads and terrain, not to mention the towns they journeyed from, through, and to.

I recently stumbled upon an officer’s letter explaining how he felt about picketing.  A “picket” is simply a soldier or small group of soldiers assigned a certain duty.  More specifically, a “picket guard,” composed of particular military personnel (companies or regiments), is tasked with monitoring major enemy movement for protection and in order to be prepared for battle.  For a more detailed definition, check out Civil War Home.

On August 8, 1863, Charles Francis Adams Jr. wrote a letter to his brother, Henry Brooks Adams, who was an American journalist, historian, and novelist.  Both men were the great-grandsons of the second president of the United States, John Adams, and grandsons to John Quincy Adams, the sixth president. 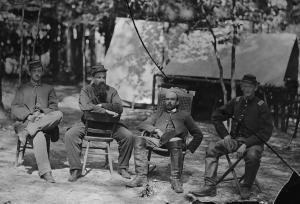 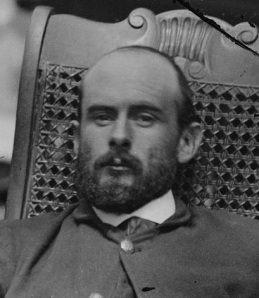 In commenting on picketing, this is what Charles had to say to Henry:

During the last week I have been picketing the Hazel River, just above its junction. The enemy was just the other side of the river and just active enough to keep up one’s excitement. The anxiety wears a little on one, for though one soon gets accustomed to the proximity of the enemy, the necessity of continued vigilance and perpetual preparation gets wearisome at last. (Source: Daily Observations from the Civil War)

When I think about what it must have been like being in close proximity to the enemy like Charles Adams Jr. and his brothers in arms were, I think of playing hide-and-go-seek.  My two and a half-year old daughter, Sophie, and I play all the time.

Just a few weeks ago, I was hiding in the tub behind the shower curtain.  The door was opened and she kept walking by it and even into the bathroom!  Each time she got close to me, my breathing would quiet down as my heart pounded within my chest and the tension built.  I was afraid of being caught.

However, the difference between Charles and I being found is drastic.  My daughter giggled with me and tickled me when she discovered my position.  If Charles’ enemy found him, they might have killed him!  Perhaps worse, he could have even become a prisoner of war.  Then, the position of his troop may have been exposed.

I wonder what it must have been like for Charles to constantly be on edge, fearing that he’d be revealed to his enemy yet needing to be diligent in his duty.  I wonder what its like to keep continual watch for your sake and the good of your entire troop.  It sounds like a tedious yet tremendous responsibility.

Until next time Picket, keep watch and soldier on…