Are You Cussin’ Me!?

I regularly listen to the well-known podcast Stuff You Should Know (Check these guys out if you want a good chuckle).  As I was podcast “shopping” the other day, I stumbled upon another How Stuff Works affiliated podcast called Stuff You Missed In History Class.  I was really looking for a good go to Civil War podcast, which I found, but became interested in a short series SYMHC did on American Civil War spies.

The infamous Belle Boyd, or better known as “Belle Rebelle” and “Cleopatra of the Secession,” began spying at the young age of 17.  As I listened to this episode, I was fascinated by her story and the length she went to in order to gather information and relay it to the Confederacy.

Legend has it that a drunk Union soldier and his posse came into the Boyd house on July 4, 1861 (of all days!) searching for the presence of a suspected Confederate flag to confiscate and demanding that a Union flag be raised instead.  Belle’s mother protested saying, “Men, every member of this household will die before that flag is raised over us.” (Source: civilwarhome.com)  Knocking down Mrs. Boyd and cussin’ at the ladies, this “gentleman” done messed up now!

Belle, responding in fury, “took a Colt 1849 pocket pistol and shot him dead.” (Source: Opinionator)  She simply could no longer tolerate hearing profanities in the presence of ladies such as herself and her mother.  This is precisely what prompted Belle’s involvement in the Civil War as a spy.

Considered to be perhaps her greatest “achievement,” Belle assisted General Stonewall Jackson in the battle of Front Royal, part of Jackson’s Shenandoah Valley Campaign, with some timely info on May 23, 1862.  Sunbonnet in hand, Belle ran through Union lines, was then shot at by Union pickets in the battlefield, but finally made it through to the Rebel side.

Her corroborated information that the Union forces were smaller than expected was just the push Jackson and his men needed to swoop in and claim the victory that day.  Having risked her life and limbs, Stonewall was grateful of Belle’s efforts enough to write her personally:

I thank you, for myself and for the Army, for the immense service that you have rendered your country today.

As I reflect on Belle Boyd’s gumption in using her womanly charm to obtain vital information from Union soldiers and bravery in maintaining open communiqué with the Rebs, I am speechless.  All I can say is, “Wow!  What a lady.  She must have been fierce.”  Please check out the links in this post to learn more about Belle Boyd. 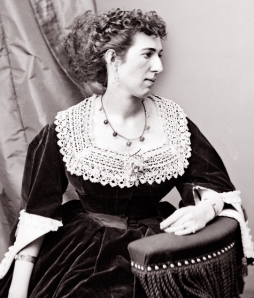 Until next time, Spy on…